February 25, 2019PointsThe LatestUsing Points
Let’s cut to the chase. Some links on this site pay us referral fees for sending business and sales. We value your time and money and won't waste it. For our complete advertising policy, click here. The content on this page is not provided by any companies mentioned, and has not been reviewed, approved or otherwise endorsed by these entities. Opinions expressed here are the author's alone.

We recently covered some of the brilliant ways you can redeem Amex Membership Rewards points. Soon after publishing, we started receiving requests for a similar post on how to redeem Chase Ultimate Rewards points.

Since Chase Ultimate Rewards is one of the most popular transferable points programs out there, we decided to get right to it. Of course, it doesn’t hurt that Chase has several great airline partners and the best hotel partner — it’s a fact — of any transferrable program.

Before we dive into some of these fun ways to redeem your Ultimate Rewards points, we want to remind beginners (and those under 5/24) that Chase is the place you want to start when it comes to credit card points.

If you’re considering a new Chase card to help boost your Ultimate Rewards balance, you have some great personal and business card options.

With that, let’s dive in! There’s not getting around the fact that flying to New Zealand is going to take a while. However, if you can find award space on Air New Zealand out of Los Angeles, Houston, or Chicago, you can save yourself a ton of time.

Even better is if you can find business class award space on Air New Zealand which can be booked for 62,500 Flying Club miles (one-way) — no carrier-imposed surcharges, either. Let’s be honest, New Zealand is a gorgeous place to visit but you’ll feel much better when you arrive if you were able to lie down during that 12 to 16-hour journey. Whatever time of year you visit, it’s going to be beautiful, especially Queenstown. There’s a reason it’s so popular and we can’t recommend it enough. You might even find yourself doing an adrenaline-pumping bungy jump from 439.6 feet (134 meters) — if you’re wondering, it’s awesome! 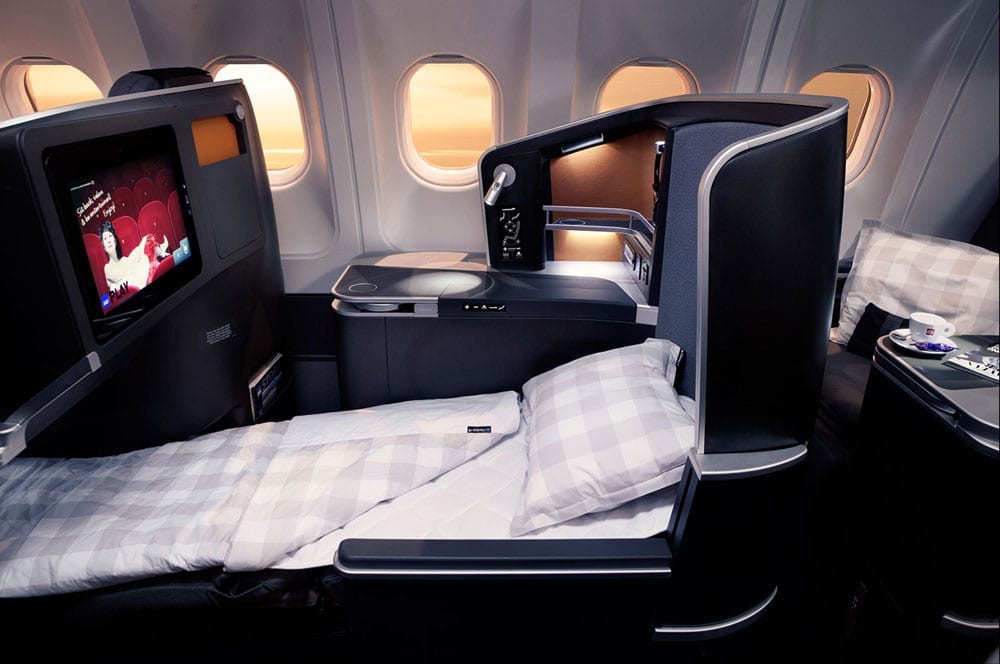 If you’re booking a round-trip award with United miles, you might as well get as much out of it as you can. That’s where the Excursionist Perk comes into play which is basically United’s stopover option.

The Excursionist Perk allows you to include a free one-way flight within a single region on a round-trip award ticket. The easiest way to get a handle on this is to just look at an example. In fact, we’ll look at an option that includes both a free one-way and an open jaw.

Let’s say you want to take a couple (maybe a few?) weeks to visit Europe.

Your open jaw is your travel between Vienna and Munich.

Once in Munich, you could fly to Copenhagen on Scandinavian Airlines (SAS) or Lufthansa in intra-European business class which would be your free one-way flight. After Copenhagen, you could complete your round-trip by flying back to Washington Dulles in business class on SAS.

All-in, this would cost 140,000 United miles plus taxes/fees for the flights and maybe $50-100 for the two train tickets to see four great European cities. Having lie-flat seats and lounge access throughout the trip doesn’t hurt either. Chase’s partnership is one of the big reasons the Ultimate Rewards program is so valuable. While you can transfer Amex Membership Rewards points to Hilton and Choice, transferring Chase points to Hyatt almost always gets you much better value for your points thanks to reasonable redemption rates.

When you pair these redemption rates with some amazing luxury properties, it’s a potent combo that could help you book the trip of a lifetime. While Gib’s stay at the Park Hyatt Sydney didn’t quite live up to expectations, it still has amazing views and is a beautiful hotel. At 30,000 points per night, that’s a fantastic way to book a stay at a hotel that regularly charges over $900 per night.

That’s not the only luxury hotel Hyatt has to offer, of course. You can find other great Park Hyatts at destinations such as the Maldives, New York City, Paris, and Vienna.

If you’re someone who enjoys going to major events such as the Super Bowl. concerts, etc., using Hyatt points will get you absolutely insane value as the cash prices of nights can skyrocket at these times.

You can book a one-way business class award to Madrid for only 34,000 Avios — round-trip for 68,000 Avios. The total taxes/fees on these awards will be more than reasonable at about $210 for a round-trip booking.

If you’re flying to/from New York, you could even find your way onto one of Iberia’s nice new Airbus A350s. Can’t go wrong with that! The original double bed in the sky, Singapore Suites has long been a favorite of those looking for a luxury flight experience. Of course, the massive pre-order options via their Book The Cook service doesn’t hurt, nor does the option to enjoy both Dom Perignon and Krug champagne.

From start to finish, Singapore Airlines just does things right. Now, to try Suites Class on the A 380 to/from the U.S., you’ll need to find your way to New York (JFK). It’s not the cheapest redemption in the world at 132,000 KrisFlyer miles one-way to Singapore — it’s worth it — but you won’t get hit with carrier-imposed surcharges.

Often, we’ve found award space is better flying to rather than from New York so it might make sense to work in this experience on your return from Singapore. Whatever direction ends up working for you, we’re confident you’ll be impressed this luxury experience at every turn. In Asia, Cathay Pacific provides a ton of non-stop routes at reasonable rates including 20,000 Avios to/from Tokyo, Seoul, Singapore. Not too bad for a 3-4 hour flight. If you’d prefer to save some points, you can book economy for only 10,000 Avios.

If you find yourself in Australia, the short hops between Sydney and Brisbane or Melbourne on Qantas can be booked for 4,500 Avios one-way. If you want to try Qantas true business class — lie-flats and everything, you can even find award space on an A330 between Sydney and Melbourne for only 9,000 Avios. It’s a short flight, but a fun one.

LATAM is a go-to partner in South America but the route that really fascinates me is Qatar Airways’ fifth-freedom route from São Paulo to Buenos Aires. You can book this 3-hour flight for 7,500 Avios one-way in economy class or 15,000 Avios for business class. Oh, and this flight has Qsuites. Now, that’s a fun 3- hour fifth-freedom flight!

The important thing to remember is that surcharges are rough flying from Buenos Aires, so you’ll want to fly from São Paulo to keep the cash cost down.

Not to be left out, off-peak in Europe can be had for as little as 4,000 Avios when you fly Aer Lingus, British Airways, Iberia. Now, that’s tough to beat! If you’ve earned the Southwest Companion Pass through one of the Chase co-branded Southwest credit cards or through lots of work travel, you have access to one of the best travel perks out there.

The ability to book 2-for-1 award and cash tickets, you can travel all over the U.S. or two Mexico, Central America, or the Caribbean at amazing rates. While you might have already earned Southwest Rapid Rewards points from the Southwest cards or your travel, Ultimate Rewards are a great way to supplement your balance.

Just think about that, you only need enough Rapid Rewards points for one person to get two tickets. All you have to do is take care of the taxes/fees for each passenger which are more than reasonable. Like Singapore Suites Class, this also made the top 10 list for using American Express Membership Rewards points. But, seriously, how could we not include it on our Chase list?

If you’re going to visit the most Michelin-starred city in the world — 230 freaking restaurants, you might as well fly there in style while sipping Krug champagne. Of course, you should also make sure to try the Hibiki 21-year-old Japanese whiskey on your flight that often retails for $500. This is not the time to order your whiskey and coke.

You can book non-stop flights of no more than 800 flight miles within Japan for only 5,000 miles. While United doesn’t pass on surcharges, you won’t even have to pay taxes/fees on some routes — the example in the image above requires exactly $0 out of pocket.

If you’re traveling within other regions outside the U.S., you can book non-stop economy flights (under 800 flight miles) for 8,000 United miles. These can really be useful if cash prices are steep when you need a flight.

If you have the Chase Sapphire Reserve and plan to book economy flights either domestic or international, you’d be wise to check the Chase Travel Portal rates before booking.

With the Sapphire Reserve, your points are worth 1.5 cents each in the portal. This often makes booking economy fare deals via the portal a better deal than transferring to an airline partner to book an award.

This is a little less common when booking business class flights as awards usually require fewer points, but you might be surprised — I booked Cathay first class with Chase points. Also, if you’re an expat booking a round-trip from Europe to the U.S, business class fares via the portal are often quite good.

Fly To Hawaii From The West Coast Via British Airways Avios

With 12,500 British Airways Avios, you can book a non-stop one-way award to Hawaii on American Airlines or Alaska Airlines with no surcharges — just the standard taxes/fees. That’s only 25,000 Avios for a round-trip to Hawaii.

If you want to book a flight on American, your only options to fly to Honolulu are out of Los Angeles or Phoenix. However, Alaska Airlines operates flights from Anchorage, Los Angeles, Oakland, Portland, San Diego, San Francisco, San Jose, and Seattle.

If you want to fly to Maui, American and Alaska operate non-stop flights from the same airports with one exception. Alaska offers non-stop service to Maui from Sacramento but not Anchorage.

As we mentioned up top, Chase Ultimate Rewards are the go-to points for beginners because of the Chase 5/24 rule. If you’re just starting out, you’ll have several options, but you need to remember that you need a card with an annual fee if you want to transfer points to airline partners.

This means you’ll need at least one of these cards:

To help you earn more Chase points, you can use one of the Ultimate Rewards cards that don’t have an annual fee but have different bonus categories to help you earn points faster.

Like Amex Membership Rewards, the Chase Ultimate Rewards program has plenty of options to help you book business and first class awards and even some cheap short-hauls in economy class.

Whether you’re a points novice or a points pro, Ultimate Rewards points are some of the most versatile you can earn. With a little thought and the right combo of cards, you won’t have any trouble earning the points you need for your next trip.