There’s a seat in Virgin Atlantic’s A350-1000 economy cabin that has more legroom than any seat in premium economy, or even the airlines beautiful new upper class. Yep, In every airplane cabin, there are always going to be seats and rows which are far more desirable than others, and if you are clever enough to get in and pick one early, you’ll have a better flying experience. Who doesn’t want that?

We went up and down the aisles of each Virgin Atlantic Airbus A350-1000 cabin, testing all the seats to find the best option in each, just to save you hassle. Well, that, and we get advertising money from you being here, which is nice too.

Oh – and wherever you sit, don’t forget to watch the HD tail or belly cams to enjoy a front on view of your take offs and landings. They are found under “my flight” on the entertainment system. It’s amazing, seriously. Virgin Atlantic went big on economy on the Airbus A350, so much so, that the new economy seats have larger entertainment screens than some of the older Upper Class seats on the Airbus A340, coming in at 11.5 inches with HD clarity and USB ports for charging!

All A350 economy seats have 17.4 inches of width, which is far above average, and 5” of recline, which is nice! If you book economy delight, the seat pitch, which basically means legroom – will go up from 31” to 34”. For comparison sake – 34” is as much or more legroom as any airline offers in economy. The best Virgin Atlantic economy seats on the A350 are without a doubt found in rows 45, 52, 53 and 54. Row 45 is the first row of economy and isn’t a “delight” seat, which means it can be acquired even on lower fares. Being in the front means you’ll beat most of the plane through immigration. Row 52 is near the lavatories, but if you don’t mind, you’ll be able to recline sooner during an overnight flight, since you won’t have anyone behind you. Economy delight Rows 53 and 54 each have absolute gems for economy seats, with row 53 offering virtually unlimited legroom – just look at the pictures! As far as the true best seats, aim for any seat in row 53 or seats 54A or 54K, since these seats in row 54 don’t have a seat in front, meaning they too have virtually unlimited legroom. At the far rear, the A350 has an incredibly large galley near row 70, so if you like to stretch your legs – that’s the place to go! Hot Tip: in terms of value, there’s no better Virgin Atlantic value than Economy Delight on the A350. You’ll earn 150% of the miles flown, which is higher miles earning than the cheap premium economy fares, and you’ll earn just as many tier points toward elite Silver or Gold elite status in the Virgin Flying Club. And, some rows have more legroom than any Premium or Upper Class seats. Plus, you get to use premium check in anyway…

Premium economy is a great way to fly, particularly when the price is right, which can be just above economy but thousands below business class. Virgin Atlantic shrunk seat width on premium economy to create a 2-4-2 setup for the A350, but they made up for it with a few new touches, including 13.3” next generation screens and both USB and AC power ports. Thanks to the new screens which don’t require separate boxes for the entertainment system, there’s actually a lot more space in the foot area and below the seat now for storage. Having flown in the old premium seats and the new ones, most passengers would hardly notice the new width – especially considering 18.5” is only 1.5” narrower than 20” the superb Upper Class Suites. Premium economy is located just behind the Upper Class “loft bar”, which means if you’re looking to make a quick getaway from the flight, this is a great option. 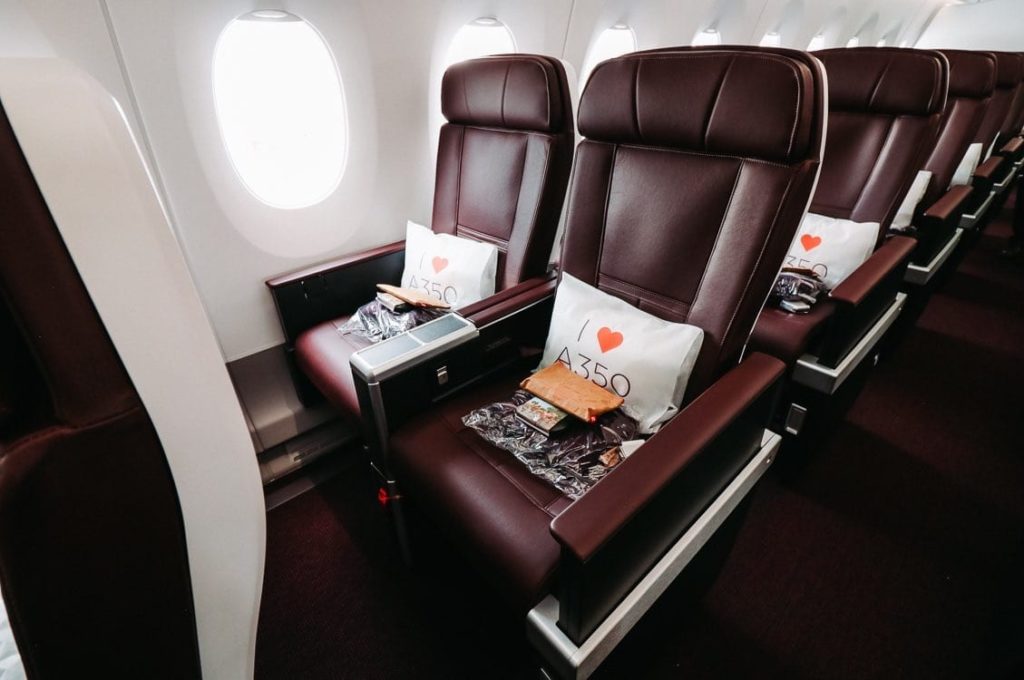 The best premium economy seats on the Virgin Atlantic A350-1000 are absolutely those in the first and last rows of the cabin in seats A,C or H,K – in pairs of two. Row 21 would be a natural choice since it’s at the front of the cabin and enjoys a little bit of extra legroom, but if sleep is the priority on your A350 flight, seats 27A, 27C, 27H or 27K are extremely desirable because you’ll be able to recline immediately, since no one will be eating behind you. There’s a wall directly behind Row 27 but no toilets, which means things should stay relatively quiet and undisturbed. Basically: if you’re trying to get out of there fast, go for row 21, but if you want the most flexibility to work, sleep or recline as you wish – go for row 27. Oh, and side note, premium also gets the cool new sustainable amenity kits, now called “goodie bags”.

For a full review of the new Upper Class experience, head here. Virgin Atlantic’s new Upper Class is unlike anything the airline has ever previously launched, featuring legitimate seclusion, privacy and next generation tech. The best feature? You can order anything from a glass of champagne to your complimentary afternoon tea directly from your seat, using the in-flight entertainment system. 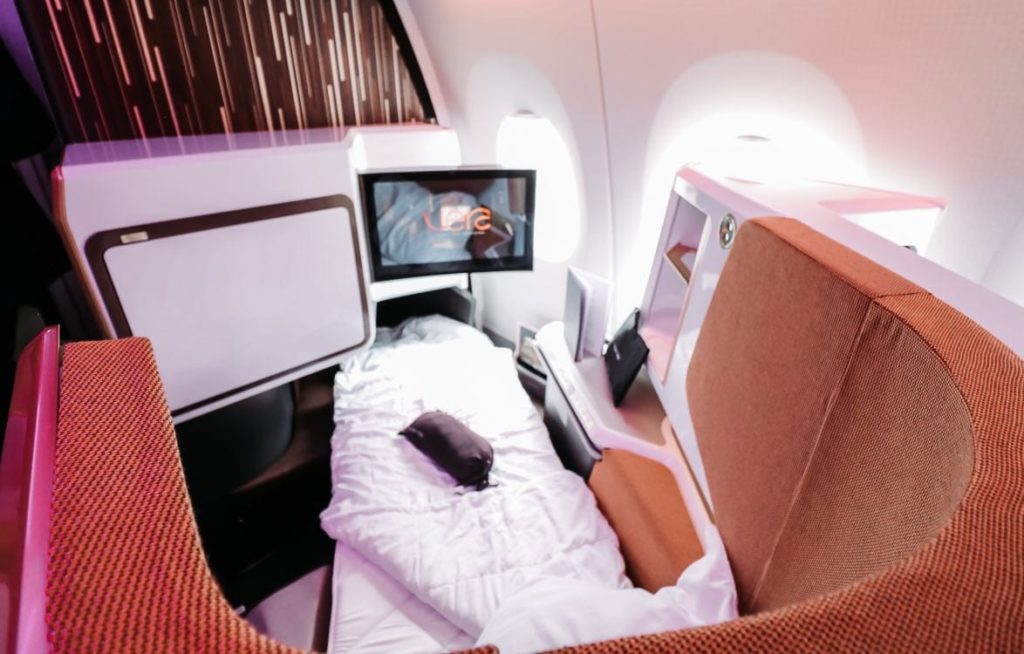 As for the best Virgin Atlantic A350 Upper Class seats, those are most certainly in row 1. Seats 1A, 1D, 1G and 1K each have increased bed width and length thanks to their position at the bulkhead. Every seat is a massive improvement and a top business class experience, but these have extra room which brings them nearer to first class dimensions. If this is a celebration, as all business class travel should be, those fancying a trip to the bar may also enjoy row 11, where you’re a mere one step away from one of the seats. I sat in 11K and couldn’t hear any noise from those talking at the bar with my headphones on, but for light sleepers these are best avoided. If you’re flying Upper Class solo, window seats in A or K are your friend, and if you’re travelling as a pair and actually want to talk, then the D and G middle seats are perfect. The seats are extremely well designed so that they face out to keep it from being awkward for strangers, but with the partition lowered it’s really easy to reach across and chat if there’s actually someone you care to speak to.

Hot tip: If you’re flying from London the USA, always sit in a K seat in that direction to enjoy view of Greenland and any other seaboard features, and sit in an A row on the way back, so that you stand a chance of seeing the Northern Lights, if you happen to take a Northern route. The Virgin Atlantic A350’s are flying out of the Airbus factory quickly, and the first four are headed to New York JFK. By December 2019, four daily flights will feature the A350 in each direction. For 2020, Los Angeles has been named as the second destination, and the airline will also launch a reconfigured A350 version onto leisure routes later in 2020. Here’s more details, including flight numbers.

You can book with Virgin Atlantic here.