What Tourists Do Wrong In Bangkok…

Hot tips like the best coffee spots, cool shopping streets and the newest hotels are great, but knowing what not to do is a tip which can’t be underestimated. No one likes feeling like a complete rookie, or just completely lost in a foreign city and in bustling Bangkok, it’s easy to do. Bangkok is an essential stop in Southeast Asia, captivating visitors from the moment they step out of the airport, and if you want to feel like you know the place before you do, avoid these common tourist fails… First things first, there’s no “official” Uber here. Uber left in April of 2018 and acquired a stake in the super popular “local” Uber alternative, called Grab. Grab is easy to fire up, takes minutes to get started and foreign phone numbers are totally fine. You can pay by card or cash, which is nice too. An airport ride to just about any central Bangkok hotel will run between 400-600THB, which is about $15. If you panic and go for one of the more formal car service options, or pre book in advance, you’ll pay at least double, and likely a lot more like quadruple. Don’t, just don’t.

Trust us – we’re weary of unidentified street meat in Baltimore just as much as you are, but in Bangkok, street food is a way of life. People buzz around on scooters, zipping from one place to another and hardly anyone has time to sit down and have a formal meal. Go with this advice: if there’s a line – it’s good. If there’s no one around, find a street food stall with a line. Dishes like Khao Gang, banana pancakes or skewered chicken are essential for any street food check list, and you’ll have no problem finding just what you’re looking for in: Old Town, Sukhumvit, Sathorn, Silom or beyond. 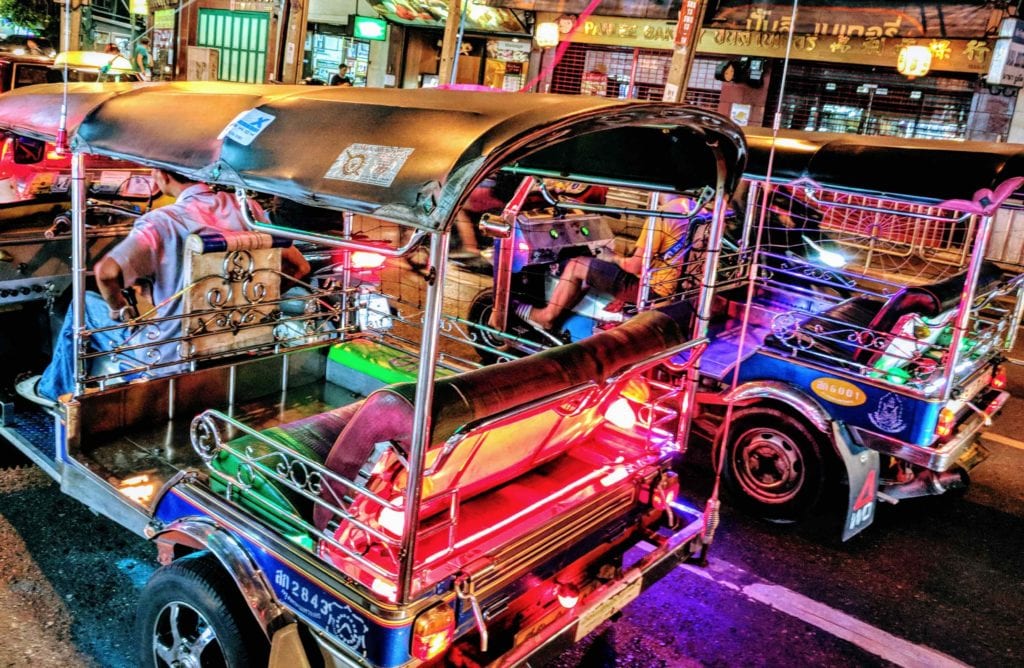 Fall For Tuk Tuk Side Trips

Tuk Tuk’s are a really fun way to see the city, or at least feel like you’re in a scene from the movie The Hangover. But buyer beware. Make sure to confirm a price in advance of your ride. If the driver suggests a short stop or detour – say no and get out. Tuk Tuk drivers are quite notorious for sending tourists on side trips to places where they make money, like tourist tat shops, and then politely force you to buy stuff. If you get the sense this is happening, it probably is, so just hop out and start again. For this reason, it’s always good to have your phone.

Bangkok is not Hong Kong. In Hong Kong, $300 a night for hotel is standard practice, but in Bangkok, paying above $200-$250 a night max is just crazy. There are so many – like truly – so many fantastic hotels at around $150 a night or less that you’d be remiss to pay more. While we’re talking hotels, go for one with a great pool, because it’s incredibly humid in Bangkok and the bustling streets tend to stick to you a bit. An afternoon or evening dip goes a long, long way. Put your hands together like you’re praying and smile to greet someone – it’s really not that hard. Learning just a couple Thai phrases, like “Sawatdee”, which means hello, or “Khob Khun” which means thank you can endear you to anyone you encounter. The same way you’d be insulted if someone refused to shake your hand back home, it’s not a great look to have someone raise their hands to greet you with respect and you not match. In the words of Nike, just do it.

Vertigo and SkyBar are no doubt awesome, and very “rooftop”, but Bangkok is a city filled with expansive rooftop bars. If you stick to Vertigo at Banyan Tree or SkyBar at Lebua State Tower, you’re going to pay top Western prices for drinks, in a city where even the best mixology can be found for much less. We’re not saying you shouldn’t go, just that you should consider many of the other rooftops like Octave, Park Society, Three-Sixty, Cru, Char Or Cielo, amongst other vaguely douchey bar names. Tuk Tuk’s may scam you, and Grab may seem cheap, but if you want to do it like a local, you’ll learn to beat the traffic with BTS SkyTrain. This impressive above ground rail system connects you to the Chao Phraya River (that runs through the city), all the popular malls – like MBK, and just about anywhere else you need to go. An unlimited ride day pass is around 140THB, or $4.

Now, there is an exception or two here, especially because Gaggan, a World Top 10 restaurant is in Bangkok, but in general it’s true truth. Buying expensive meals in Bangkok is just silly. A great pad thai, curry, chicken satay or lemongrass soup should cost a couple of dollars, pounds, yen – whatever, maximum. Going upscale just to have Thai food, or even worse, something like French food is just a waste of an opportunity in a city where there are so many affordable alternatives, with incredible quality. Thai food is made special by the pungent, fresh and powerful ingredients and you’d really be missing out by sticking to steak tartare in a bistro somewhere. Many tourists in Bangkok are headed somewhere else, as part of an awesome Asian adventure. While you may be a whizz at flight deals and all that, if you’re trying to be cool by entering BKK as your airport code, instead of Bangkok (all), you may actually be missing all the really cheap, regional flights. Don Mueang, known to flying nerds as DMK, is home to many regional airlines, serving destinations which may not be available direct from the expansive Suvarnabhumi (BKK) Airport. It can be a bit chaotic, but you can’t argue with the prices, and it’s easy to reach.