What Makes A Business Class Seat Into A “Suite”?

January 2, 2020AvGeekThe Latest
Let’s cut to the chase. Some links on this site pay us referral fees for sending business and sales. We value your time and money and won't waste it. For our complete advertising policy, click here. The content on this page is not provided by any companies mentioned, and has not been reviewed, approved or otherwise endorsed by these entities. Opinions expressed here are the author's alone.

What sounds better to you: a seat, or a suite? Chances are, you’ve picked the latter. When I think seat, I think car, restaurant or train. When I think suite, I think four seasons, infinity pool and a big heavenly bed. Attracting corporate dollars and well heeled travellers is a lot easier when something sounds incredible, without even seeing it, and lately – that’s precisely what airlines are banking on – even when it’s unwarranted. It Starts With A Door

In March of 2017, Qatar Airways did what no other airline had ever fathomed. They put a door onto a business class seat, thus transforming it into a private space. Previously, the privilege was exclusively reserved for first class travellers, and even then, doors were only found on a select few airlines. Think: Emirates, Etihad, Singapore, Asiana and Air France. 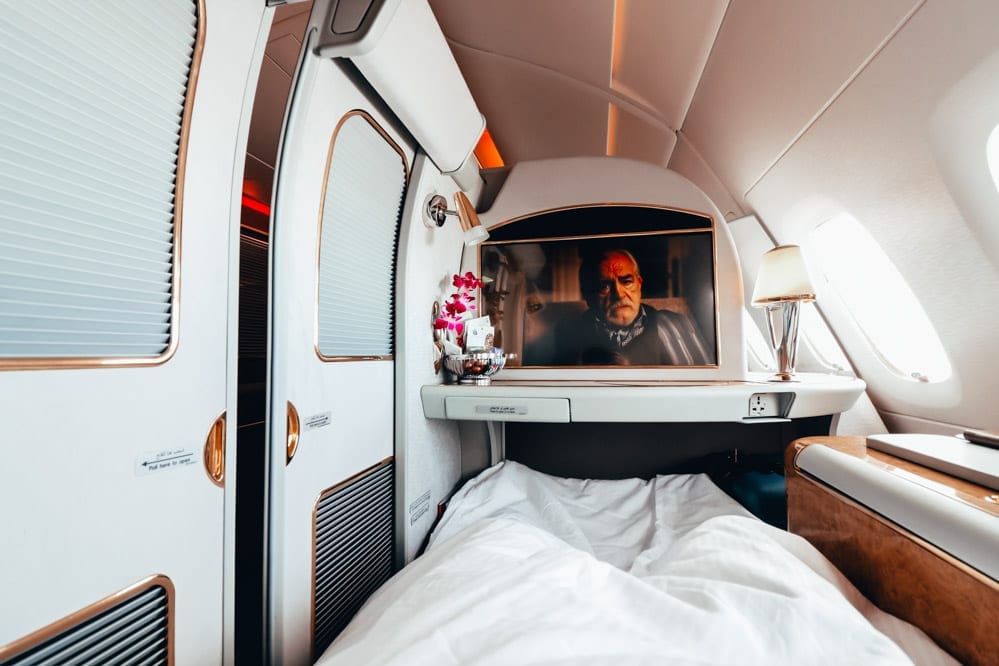 By putting a door onto a fully customised business class seat, Qatar Airways coined the phrase Qsuite to distinguish the product. After all, it ticked all the same boxes every other airline who used the term suite had used in first class, including a fully flat bed, privacy door and high definition entertainment systems with over 20” screens.

Naturally, jaws dropped, people were flabbergasted and it wasn’t long before other airlines figured that a door might be a great idea for their seats too. You can now also find business class “suites” with doors on Delta, ANA, British Airways and JetBlue. Virgin Atlantic sort of has one, but it also sort of doesn’t. Having a door on a plane with a seat you can convert into a bed is always a thrilling treat, but for true “suiteness” the size of the door really does matter. Take for example the Qatar Airways “QSuite” and British Airways “Club Suite”. In one, you genuinely cannot see another soul seated on the plane while you are seated or sleeping, whereas from the British Airways Club Suite, you absolutely can. In my opinion, if the door isn’t high enough to cover the sightline of someone of above average height, it’s not really serving all that much purpose, unless you’re laying down in the seat. It could be said that it’s useful for doing work and protecting company secrets, but that’s quite a reach, even for a marketing guru ; )

At least to me, the concept of a suite is a self contained space, where you don’t need anything from the outside world, or at least the lovely crew serving you on the flight. Obviously, there’s the whole food element, but for this criterion, it’s more about the ability to have all your belongings, bags and electronics in arms reach, without needing to go up into the bins or open your door. God forbid, you see another passenger on board! The best business class “suite” I’ve found in this regard is easily All Nippon Airways (ANA) “The Room”. The new business class suite, which debuted in August of 2019 features enough space for two passengers to sit on the seat, which means a backpack and other goodies have plenty of space to stay within eyesight.

One thing is for certain in aviation: people love the term “suite” in product marketing, whether it’s warranted or not. Since the introduction of the Qsuite, other airlines have also turned the suite phrase into their product names and that will only continue in 2020. Let’s just hope that the “seats” actually feature the doors, storage or high end electronics and bells and whistles which make the phrase feel fair enough…