British Airways A350: Best Seats In Every Cabin (With Photos + Tips)…

Congrats in advance on being a savvy traveller. While many people choose flights at random, it’s the clever ones that seek out the newest planes, and there’s good reason for that too. British Airways aside, the Airbus A350 is one of the best planes for passengers, offering air pressure which feels much more like things down on the ground, with lower noise levels and better humidity. Basically, it’s quiet, it’s beautiful and you’ll feel better if you’re battling jet lag. And for anyone who cares about sustainability in air travel, this plane consumes 25% less fuel than the previous generation of airliners.

We took a tour of the brand new aircraft after its maiden voyage to London Heathrow to join the British Airways fleet, entering service to Toronto and Dubai in autumn 2019. If you’re looking for the best seats in every cabin, and tips on how to get the best service and get off the BA A350 quickly, we’ve got you covered.

The British Airways A350-1000 offers two World Traveller economy class cabins, separated by a galley area. The forward cabin on the plane is by far the smaller of the two, and if at all possible is definitely where any traveller will want to aim. Each BA A350 World Traveller seat offers 17.5” width, 31” pitch and a 10” HD screen. All of British Airways A350-1000 economy seats feature USB charging ports, a next generation HD entertainment screen, a storage area and wifi. The World Traveller cabin on the A350 is split into rows of 3-3-3, and like most planes – there’s definitely a few rows you want to aim for. Here’s a picture of rows 30 and 31, for reference… Premium Economy is the new “it” cabin for airlines, offering an experience that’s in line with what passengers expected in the so called “golden era” of air travel. Think: nicer drink service, better food, more checked bags and lots and lots more legroom, comfort, recline and amenities. British Airways has recently updated the Premium Economy “World Traveller Plus” offering with new blankets, pillows, amenity kit and other touches, and that’s on solid display on the A350. This new BA plane offers a huge step up for World Traveller Plus flyers, with both foot stools and seats which kick up extra leg support, almost like domestic first class. A350 World Traveller Plus offers 18.7” width, 38” of pitch and 12” HD screens. The British Airways A350-1000 cabin is divided in a 2-4-2 layout, which makes the two window seats the clear favourites for any traveller. If you wanted to choose the best seats in the BA A350 Premium Economy cabin, there’s no question that: 20A, 20B, 20J, 20K or any seat in row 26 would be my pick. Row 20 will offer the most legroom and fastest exit from the plane, while row 26 on the new BA A350 means you won’t have anyone behind you, so you can recline and go right to sleep.

You didn’t think we’d leave without talking about these, did you? British Airways has introduced a completely new business class flying experience for the airline, moving away from forward and rear facing seats in a layout many would call ‘dense’; to a set up of all forward facing “suites” complete with privacy door. To put it lightly, they’re fantastic. Each suite has a door to cover your bum crack if you sleep sideways, a perfectly sized 18.5” HD screen which offers gate to gate entertainment. Nope, you’ll never need to store it away for take off or landing during the inevitable best part of your film or TV show. While the suites don’t feature overhead personal air vents, the air flow along ground level is superb, which I personally find to be a better regulator of temperature anyway. “Fresh” air should constantly be flowing, and when you’re sleeping – having the air at a lower level is far more noticeable. I’ve loved this feature on Cathay Pacific’s A350’s and it’s nice to see here as well. About the privacy… there’s lots. The sliding doors of the new A350 Club Suite effectively block any other passenger out of view if you’re seated in the seat, and particularly when you’re laying down. If you stand up to walk around the cabin, you can easily see into the suites, but that’s true on literally every business class cabin out at the moment. The finer touches such as the 40% additional storage space in the A350 Club Suite, the bespoke stitching and the new sound dampening that these suites offer each genuinely worked together to create an environment that feels… in a word… sophisticated. It’s sharp, it’s modern, it’s functional but most importantly, it’s downright comfortable and private. If there’s any fear with this sleek new seat, it’s the cannibalisation of first class. In fact, I doctored this photo above to mirror the colour scheme of the current “first” promo pictures. It’s a compelling look. Big Thoughts On The British Airways A350 And Club Suites

If you want to track the roll out, including which routes will feature the new A350, or the new Club Suites, we’ve got the ultimate resource guide just for you, and no one else. This new plane is headed for Toronto and Dubai as early as September, and these exceptional new Club Suites will find a variety of routes, including New York JFK from late October.

Aside from a feature like an on-board bar, this plane ticked every box for me, and I’m thrilled with the work British Airways put in to making it a world class aircraft in every cabin. All A350’s feature smaller galleys than previous planes, so don’t expect too much walking around room, but other than that, you really have to love it. 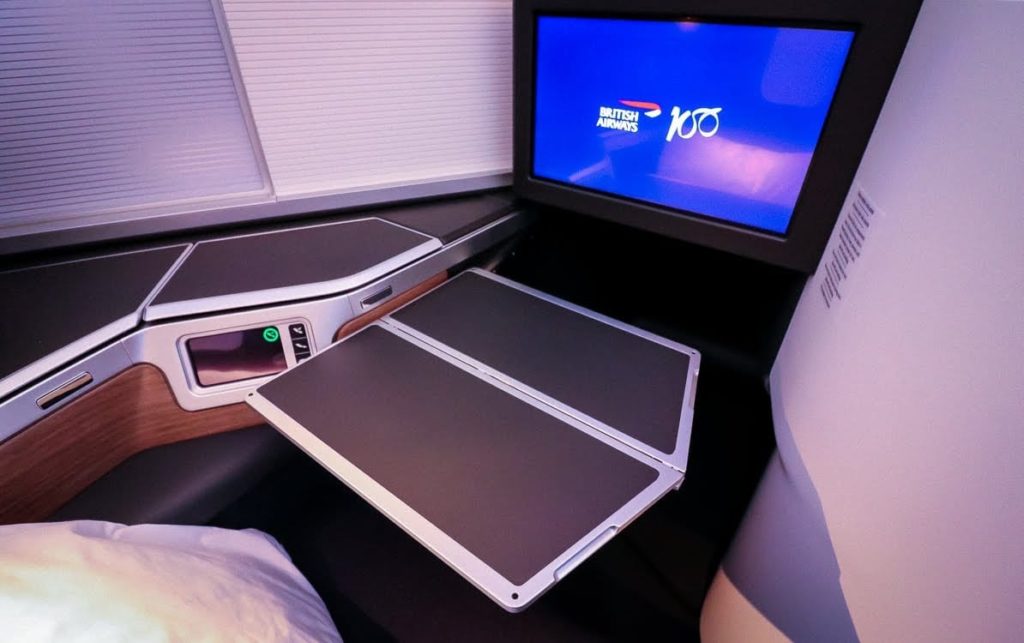 The British Airways A350 is directly in line with the Qatar A350-1000, with the addition of World Traveller Plus to bridge the comfort gaps. It’s absolutely a plane I’ll be seeking out, even if it means connecting to enjoy a superior experience. I’m a proponent of the A350 on any airline, and this airline now offers a fantastic option. If service standards continue to improve, this is definitely an experience to watch in 2020…

I’ll be reviewing the A350 next week on an actual flight to Madrid, so be sure to check back to see how it performs in the air.