January 13, 2020ReviewsThe Latest
Let’s cut to the chase. Some links on this site pay us referral fees for sending business and sales. We value your time and money and won't waste it. For our complete advertising policy, click here. The content on this page is not provided by any companies mentioned, and has not been reviewed, approved or otherwise endorsed by these entities. Opinions expressed here are the author's alone.

United has made London Heathrow a priority in the last year, adding all Polaris business class service between New York and London. That just leaves one gap to plug in the end to end flagship “Polaris” experience: the United Club at London Heathrow Terminal 2B.

Basically, you should expect United at its best on flights to and from the British capital, and at Polaris lounges in major US gateways, but as Heathrow still features the old, less refined version of a “United Club” lounge space, you should curb your enthusiasm on departure. If you do, you’ll be pleasantly surprised by this just slightly above average place for people who fly more than others or pay more than others wait for a flight.

Long story short, the United Club at London Heathrow Terminal 2 won’t be winning any awards any time soon, but it’s a very solid Heathrow lounge. I had a good time and if you read this, you might too. 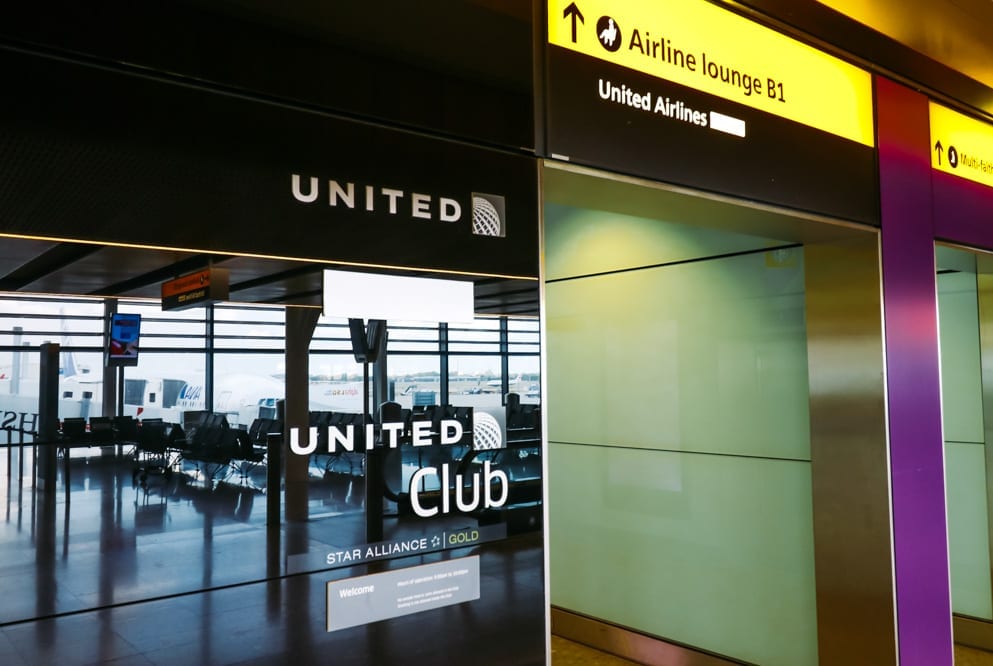 Since virtually all “long haul” flights out of T2 leave from the connected “T2B” terminal away from where you first enter the airport, you’ll have quite a walk along the escalators and moving walkways to reach the United Club space, nearest gate B46, which happens to be near where ANA flies from.

I mention this, because if you’re simply flying short haul within Europe, you may find the Lufthansa offering nearer security in the main terminal to be just fine, as it will save you 10 minutes in each direction. I wouldn’t say the United Club is worth the length diversion.

If you are flying long haul out of T2 as a Star Alliance Gold, or business class passenger travelling on a Star Alliance airline, you’ve got choices in the satellite terminal of T2B, and each airline lounge is easy to “hop”. Singapore Airlines and Air Canada each operate lounges within steps of the United Club by Gate B46, and each one does something better than the other.

For example: if you like spicy food, like a biryani, the Singapore Airlines Lounge is where you’ll want to eat. Don’t worry, you can always hop back to the United Club… This is still a “United Club”, meaning it’s not a rebranded and refreshed “Polaris” lounge, but it’s got more funk than your average United Club. After a quick escalator ride, you’ll find yourself facing the check in desks, which kindly note that Star Alliance Gold flyers can bring a guest. That probably saves the most FAQ from the get go. The United Club at Heathrow T2 is spacious, varied and fully stocked, with the benefit of nice high ceilings and some natural light. That’s a lot more than many lounges can ever say for themselves. For all travellers, staying “connected” is a key, and this space has fantastic power ports available virtually anywhere you sit, including the elevated dining tables, which also make nice work spaces. Being a United Club, it does tend to be more crowded than one might hope from United’s more elevated Polaris lounges, but in fairness I never struggled to find a seat, even if it was closer to other passengers than I may typically prefer. You could say the same about plenty of other airlines at LHR, so fair enough. Hot tip: if you go to the end of the lounge and stay right, there’s a lovely circular space that tends to stay quiet, since most people give up and plonk down before reaching it. It’s perfect for reading a book or having a quick bite in peace, so long as some a-hole isn’t having a DYKWIA phone call in the room at the same time. You can’t make that $h!t up.

Basically, keep walking until you hit a solid wall, the back of the lounge is more tasteful and less trafficked than the front, and you’re always pretty much equidistant to the bar, in case you’re into that sort of thing. 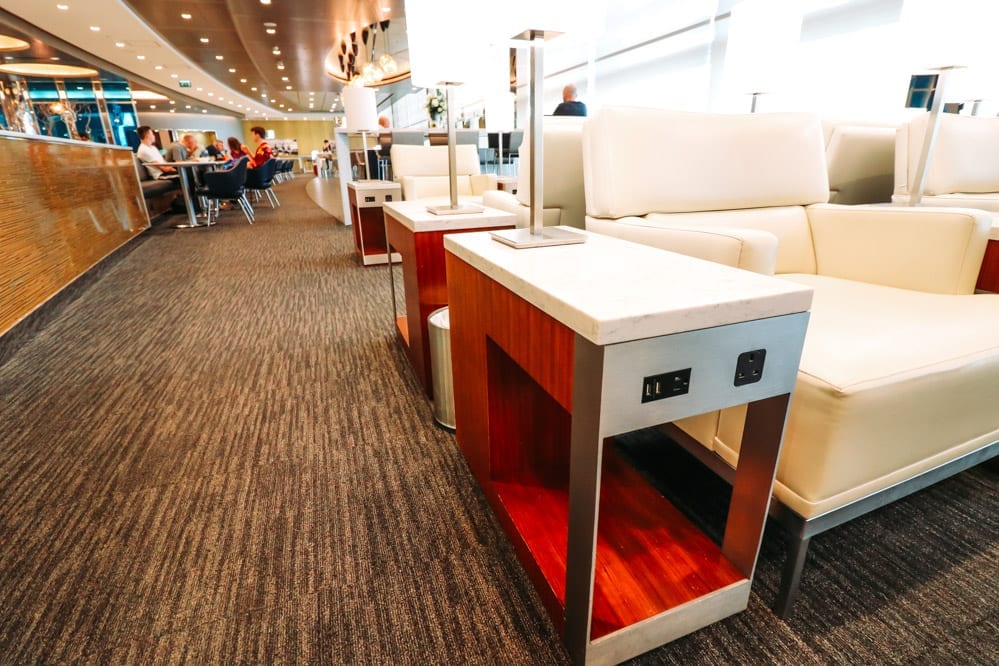 Visually, the United Club at LHR T2 has got some appeal, but it also feels a bit like a lower end W Hotel trying to be hip, without actually doing a full makeover. It’s got a few design elements, some flare, but it can feel a bit cheap and contrived in the daylight. 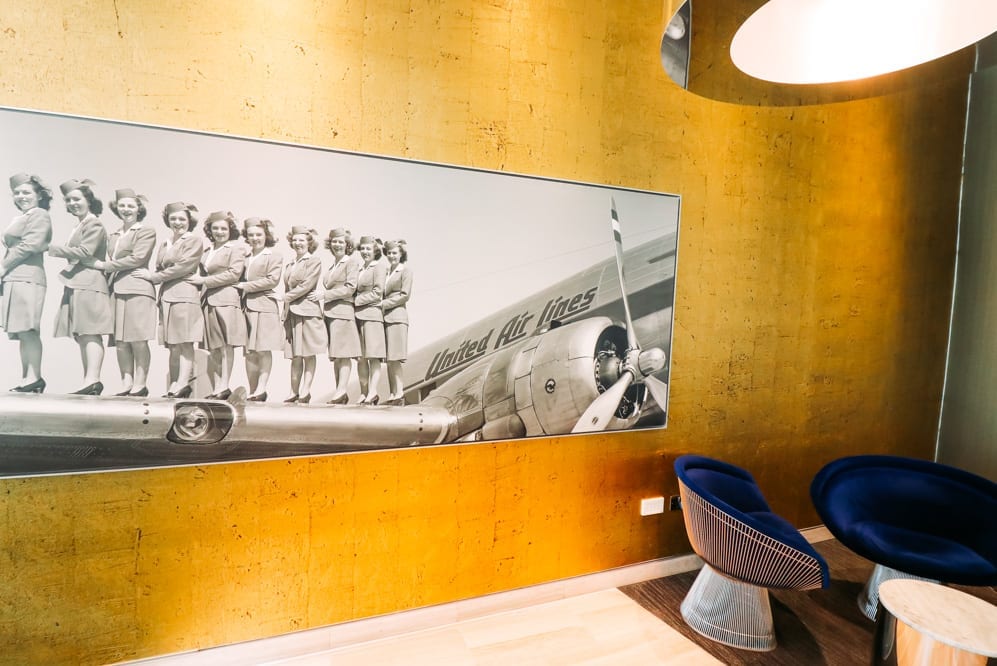 So what makes this lounge good? A very solid bar, great variation in seating areas, an excellent help yourself coffee, water and soft drink station and the option of getting a bit of natural light. Oh, and showers. An airport shower is one of the greatest travel rituals before a long haul flight and United does these very well for a business class offering. 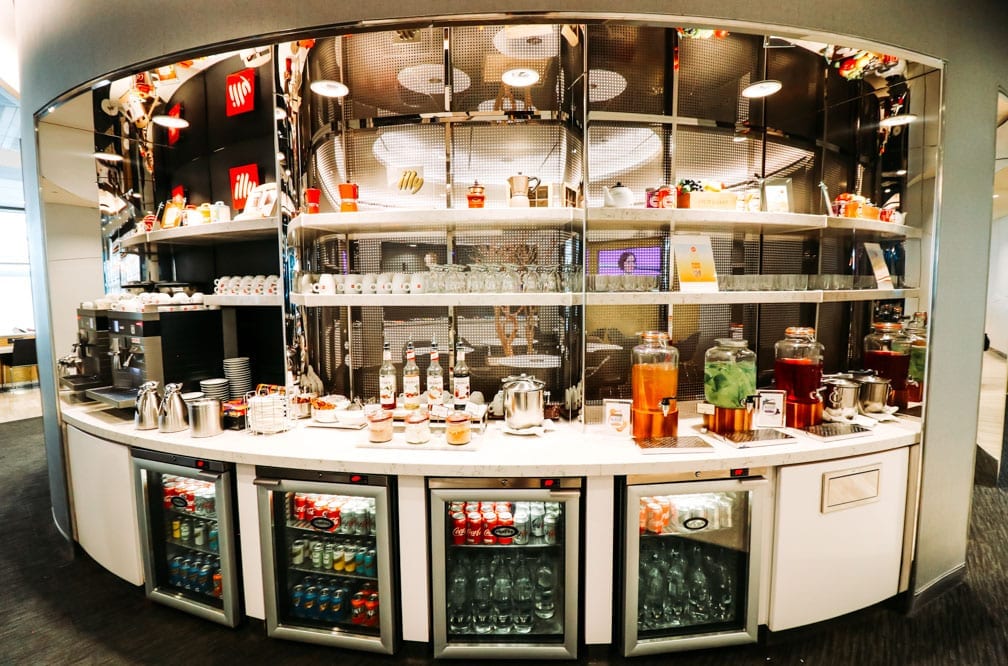 Shower rooms are to the right as you walk into the lounge space, about halfway down the hall and are of very solid quality. Despite crowding in the lounge, there didn’t appear to be *too* much of a wait.

I wouldn’t say “come hungry”, and if you happen to be, I’d probably say to head over to the Singapore Airlines lounge, but if you need a quick snack, a *decent* cup of coffee, or some bog standard hot plate food, this will do the trick. If you’d like to toast the trip however, this is a great spot. 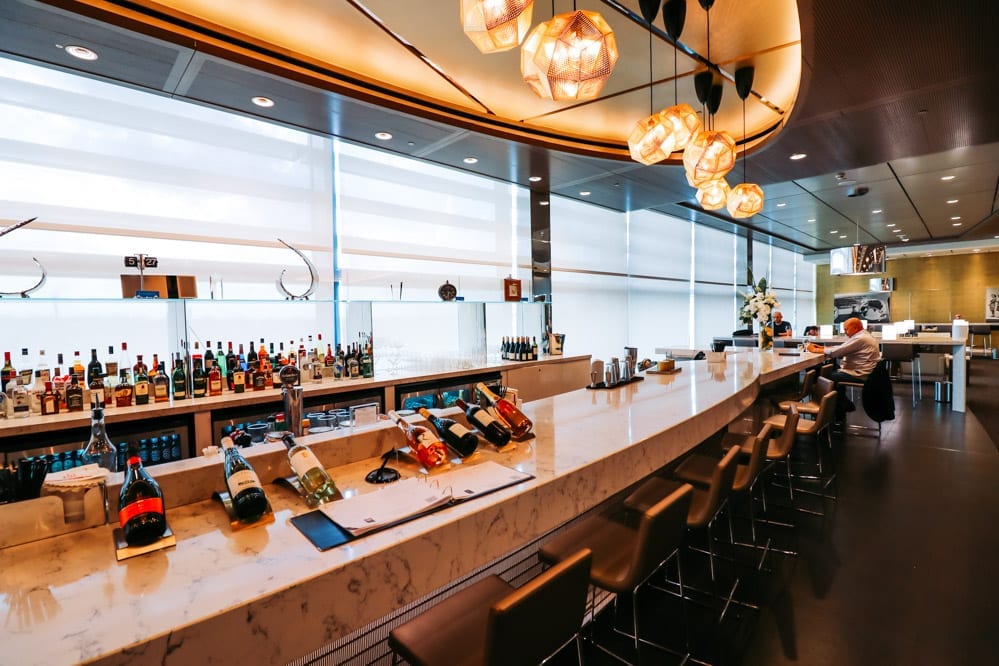 It’s not often I’d advocate perhaps waiting for airplane food, but you’re not missing much from in here. Think: heat lamp eggs, bacon and other standard buffet items. The packaged sandwiches aren’t all that appealing but won’t kill you and occasionally you’ll find a decent hot buffet item.

But the crown jewel here is the bar. There’s decent, borderline nice wine, some cocktails with a bit of creativity and very nice bartenders who are happy to serve. Being close to the windows, it’s a great social space and one of the nicer areas you’ll ever find in a United Club. 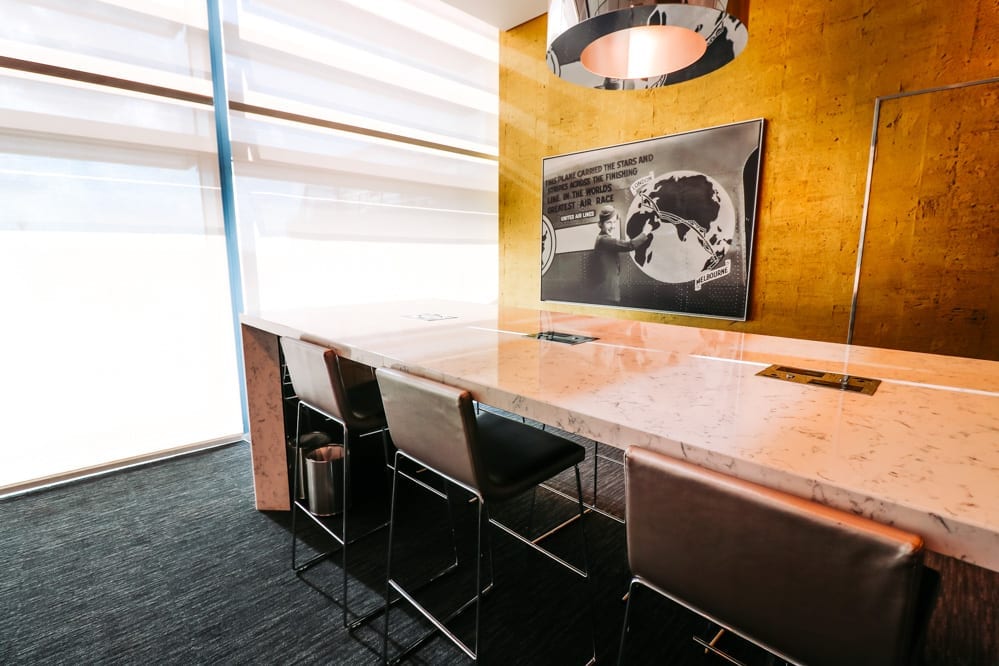 What To Expect From The United Club Heathrow

With any hope, this will get a full head to toe makeover and become an entirely new space with a more a la carte food concept and further upgraded beverages. Until then, it’s a perfectly acceptable place to spend an hour before a flight, answer a few emails and drink something that makes you happy.

I certainly didn’t have any “pinch me” moments, the way some spaces like a Cathay Pacific or Virgin Atlantic lounge just give you a “wow” factor, but I also thought it was genuinely better than I expected from United.

As noted, I went elsewhere for food and was glad I did, but I did return for natural light before a long haul flight. I can’t wait to see whether United really goes for it with this lounge, or just leaves it be.

With all Newark to London flights featuring a flagship Polaris business class seat, and Polaris lounge at Newark, it only seems fair that this one get the royal treatment too. After all, it’s in London.