There’s no way to get around it, the Delta SkyMiles program is one of the most frustrating airline loyalty programs out there. From playing games with award rates to unannounced devaluations, it’s hard to love Delta SkyMiles.

That being said, you still have some very good options for your SkyMiles. In fact, when it comes to SkyTeam awards to Asia, it might even be your best option now that earning Korean SkyPass miles is so tough.

With plenty of Amex Membership Rewards cards (Learn More) to help you earn more SkyMiles  Delta has a distinct advantage if you want to fly to Asia when you compare the award rates of other SkyTeam options.

That’s just one reason why you shouldn’t rule out SkyMiles. Even if Delta isn’t always the most consumer-friendly airline, ignoring them would meaning missing out on some very great award bookings options.

Now, let’s make sure you know how to redeem your Delta SkyMiles.

Need some inspiration? Check out the best ways to use Delta SkyMiles for max value. In 2015, Delta chose to unpublish their award charts which has made it much more difficult to know the fewest number of miles required (saver level) for any given award.

Here’s a rough estimate of what to expect as saver level on international flights operated from the U.S. on Delta and its partners. Please keep in mind that Delta makes unannounced changes so they could change these rates at any time.

* If you’re booking an award within 21 days of departure on a partner, Delta requires the following number of miles:

If you’re planning to use SkyMiles to book an award to London on Virgin Atlantic, we’ve noticed the award rates are actually higher than what you’ll find to the rest of Europe.

Additionally, if your itinerary includes a domestic connection (or connections) on Delta, you might be required to use more SkyMiles. This isn’t always the case but keep an eye out for it.

Since Delta is willing to price awards at sky-high rates on its own flights — especially international business class awards, it can be particularly tough to find reasonable award rates. The example below shows a month of dates from Atlanta to Johannesburg at 465,000 miles per person for a one-way business class award. 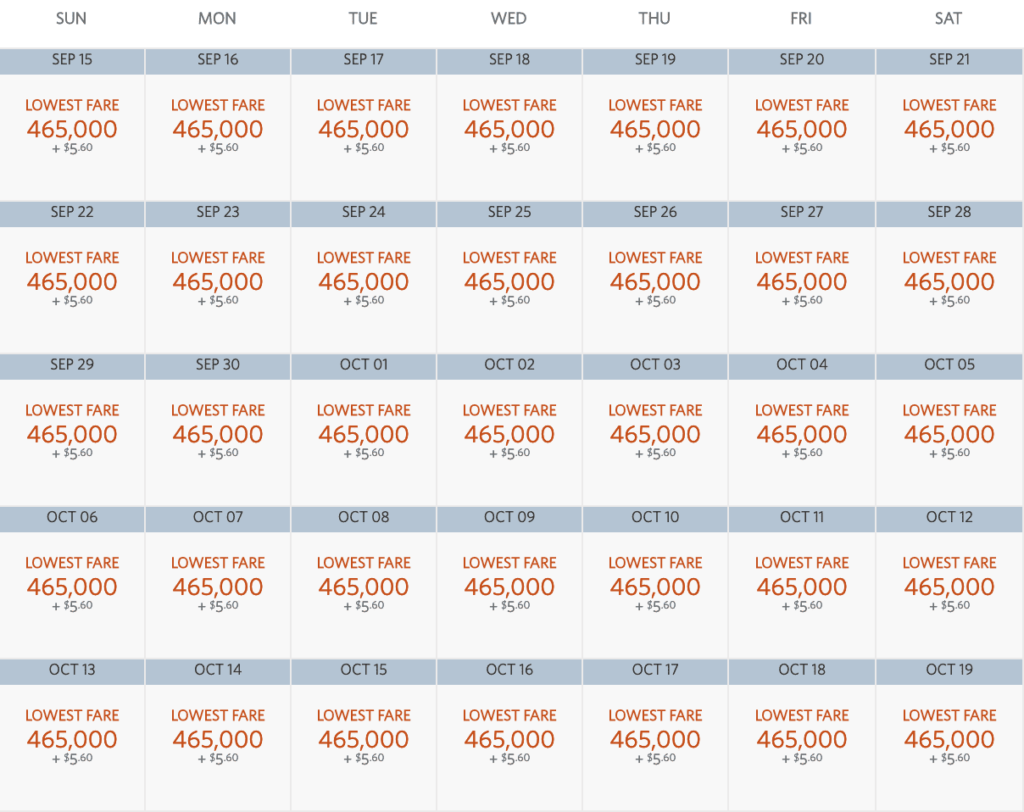 This has caused a lot of frustration and only service to emphasize the importance of being flexible with your travel dates when booking Delta awards.

If you’re going to book a domestic award on Delta, the award rates vary quite a bit depending on your origin and destination so you’ll want to check multiple dates to get an idea of how few miles you could use.

Honestly, if you want to ensure you’re getting max value when redeeming SkyMiles, run a calendar search and scroll through several months of dates. Yes, this is annoying but we’d rather you take an additional two minutes than get ripped off.

How To Find Award Space

Delta’s award search capability has certainly improved in the last few years, but that doesn’t mean it’s perfect. As you can see in the table below, you can search for award space on almost all of Delta’s partners.

Occasionally, Delta won’t show award space that is actually available — this has been an issue with Chinese carriers at times. As a backup, it’s always a good idea to double-check SkyTeam award space by searching with Air France or KLM.

How To Book Award Tickets With Delta SkyMiles

Assuming you can find the award space you want (at the desired award rate), it’s generally not too difficult to book with SkyMiles. Just run your search from the Delta homepage with your origin, destination, dates, and number of passengers.

You’ll want to select “Advanced Search” which will show a dropdown menu and allow you to choose to book with miles and your desired class of service. You’ll be shown a week of dates but you can expand to 5 weeks from the search results page which can make it much easier to find award space.

Once you’ve selected your date and flight, you can complete the booking right there.

If, however, you want to book an award on an airline partner that can’t be found on your Delta search, you’ll need to call Delta (800-221-1212) after searching with the appropriate site (see table above). Make sure you note the flight info before making this call so you can provide it to the phone agent.

Delta doesn’t restrict your routing in the weird way that American Airlines does so they have that going for them, at least. Similar to American, you won’t be able to include a stopover on your itinerary. Unlike American, Delta does not allow you to put awards on hold while you transfer points.

Let’s talk about the two major rules you need to know before booking an award with Delta SkyMiles. First up, we have Maximum Permitted Mileage (MPM) restrictions. If you’re not an avgeek, you might be wondering what the heck that means. Don’t worry, that’s totally normal.

A simple definition of Maximum Permitted Mileage is that it’s the maximum number of flight miles you can fly between your origin and destination. It factors in possible connections and can be different based on whether you cross the Atlantic or Pacific oceans.

Delta requires the number of miles flown on an award ticket to be within the Maximum Permitted Mileage if your award is not a published route — a route that your search on Delta’s site provides.

Unfortunately, Delta does not provide a way to check Maximum Permitted Mileage so you’ll need to use ExpertFlyer — a subscription site — if you want to do so.

If you’re trying to piece together an award segment by segment, you’ll want to have the MPM info on hand. As you run your search, you can enter the segments into GCMap to see the total number of flight miles.

For the vast majority of people booking awards with SkyMiles, this won’t be a major consideration but this can help guide you if you’re someone who likes creative routes.

Next, we have married segment logic which has been the bane of many people’s award booking experience. Yes, this is another term you might not have heard.

This best way to describe married segments is that you have two segments that can be booked together on one itinerary but that cannot be booked individually.

For example, I might see a saver level award from Chicago O’Hare (ORD) to London Heathrow (LHR) with a connection at New York (JFK). However, if you searched for New York to London, the flight wouldn’t show. This is married segment logic and it can be extremely frustrating.

Unfortunately, Delta uses married segment logic but it’s good to be aware of this so you don’t tear your hair out in frustration. Delta doesn’t always pass on carrier-imposed — “fuel” — surcharges but it’s important to know when they will so you can avoid any nasty surprises.

While they won’t hit you with surcharges flying to Europe on their own flights as well as Air France, Alitalia, KLM, and Virgin Atlantic, you will be on the hook when you fly from Europe.

Additionally, don’t be surprised if you see surcharges on some partner including, but not limited to:

For many, the most common sticking point will be flights returning from Europe. The surcharges are steep and often make using another program to book an award a good idea — United comes to mind as they don’t pass on surcharges out of Europe.

How To Earn Delta SkyMiles

Perhaps the biggest bright spot with Delta SkyMiles is its relationship with American Express Membership Rewards. While Amex also issues co-branded Delta cards (Learn More), it’s the ability to transfer Membership Rewards points to Delta that we really like.

American Express offers several cards with bonus categories that make it easier to earn Membership Rewards faster (Learn More). Whether you spend a lot at grocery stores and gas stations or on flights and hotels, you can easily set yourself up with a combo of cards that will help you earn 2X to 5X on many purchases.

We often give Delta a hard time — and they often deserve it — but that doesn’t mean that the SkyMiles program never provides some good award booking opportunities.

Perhaps, one day, they’ll learn that just because they can make a negative change to the program, doesn’t mean they should. Until then, we just have to remain diligent in keeping an eye on what they do and using SkyMiles when they provide solid value.