I was recently on Euro News discussing airline cancellation issues, and there’s a key distinction when it comes to your passenger rights. If the airline cancels, you’re entitled to a refund. If you cancel, even if travel isn’t possible, you’re left with nothing more than a voucher, at best.

This conundrum is leading airlines to play evil games with passengers, refusing to cancel flights until the last minute, in hopes of coaxing passengers into cancelling on their own. The reasons for doing so are huge, but the ethics behind it are questionable at best…

Flight Clearly Cancelled, But Not

All around the world, airlines are intentionally not cancelling flights until the very last minute, or informing customers of “schedule changes” rather than cancellations, specifically to avoid refund rules.

In recent weeks, The United States and European Union each reiterated legal guidance to airlines that if a flight is cancelled, a refund must be offered – not just a voucher. Following the guidance, too many airlines are now choosing to play games with their schedules, to avoid the ruling.

Travel to Greece is a perfect example, but it’s only one of thousands. 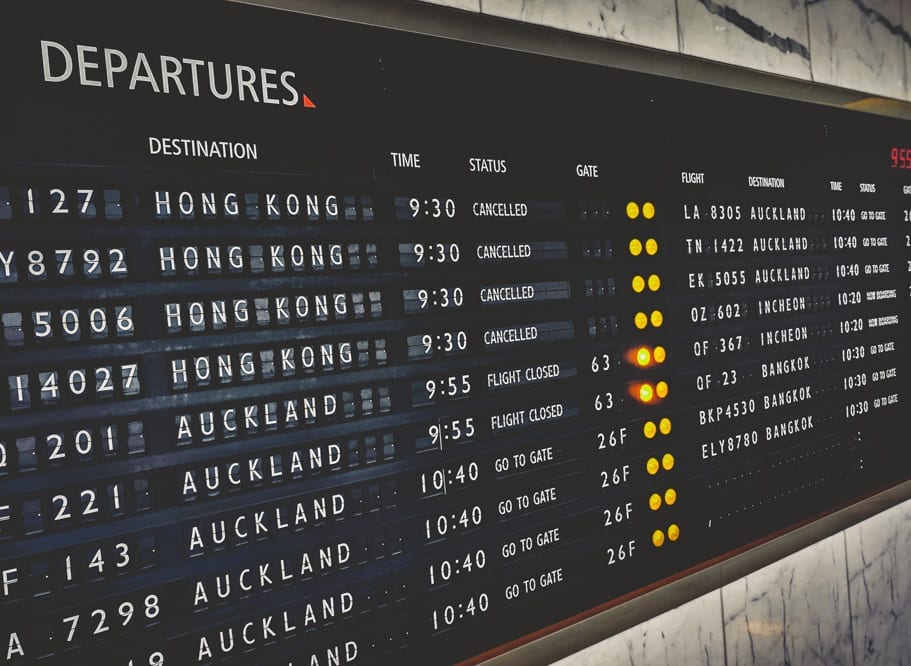 Greece has already announced no air traffic in or out from most destinations through May 15th. You’d think, being that the government has already stipulated a minimum time in which flights absolutely won’t operate, that flights would be cancelled up until May 15th. You’d be wrong.

For most airlines, they’re just “sold out” right now. EasyJet is yet to cancel flights including dates as far forward as May 1st. Those with current bookings still haven’t received a cancellation email. The flight just appears “sold out”, if you want to book.

They’re betting that before they cancel the flight, the customer will call and cancel first, exempting the airline from refunds.

It’s bad enough for passengers with previously booked flights in limbo, but in an even more predatory move to hold, or grab onto outside cash, some airlines are still selling tickets to places they know with full certainty they won’t be flying.

Here’s tickets for sale from London to Athens, for flights which 100% will not happen, since they fall before the May 15th end date.

For utter clarity, the United Kingdom is one of the countries stipulated by Greece where absolutely no passenger flights are allowed until the 15th. That makes this itinerary available for sale at noon on April 17th, 2020 a bit dubious.

Fight For Survival, But Isn’t It For All?

For many airlines, it’s life or death, but in a world headed for recession – if it’s not actually already there – it’s hard to think of any purchase where a consumer would buy something, not get what they ordered and be happy for someone to hold the money indefinitely.

Everyone is suffering, not just airlines.

The evil brilliance of not cancelling is that passengers are effectively forced to take matters into their own hands. Within 72 hours of a scheduled flight, passengers start to panic about their ability to get in touch with the airline and at least get something back, let alone money. On the whole, airlines are not all that easy to reach at the moment.

Because the airline successfully waits until the very last minute to cancel, smoking out nervy passengers, they’re then able to tow the line of “sorry, voucher only”, even though they know full well it will be cancelled in a matter of hours, perhaps even minutes. Evil indeed, eh? People have an emotional attachment to airlines, and air travel, and for the most part that’s a good thing. We love airlines and don’t want to see anyone out of work. And we promise not to put any more and’s into this paragraph.

If you ordered something on Amazon which never turns up, you expect a refund – right? Yet because of the emotional attachment people have to airlines and their sympathy for struggles of the industry, people are forgiving airlines for not refunding purchases which were not delivered, even though it’s breaking the law in many instances.

British Airways famously re-coded their airline refund page to remove the refund button, giving the appearance that only vouchers were available. Guess what, it’s worked – brilliantly. Know your rights, and don’t be afraid to wait the airline out too.

Your Rights And How To Win

Even if you only receive a notification of a schedule change, don’t accept it as such – in most cases the airline cancelled your flight, which caused a “schedule change” and that’s grounds for a refund. Running a Google search to confirm that the flight isn’t operating is a great way to prove to the airline that you know the deal.

If you remember one thing, and one thing only from this: if an airline cancels your flight, you’re due a full refund for travel from or within the European Union or USA. If you cancel, it’s voucher at best, and some airlines can even say you get nothing.

If you can do without the cash and are happy to accept a voucher, you’re doing a good thing for the airline industry, but only accept a voucher when the airline has been transparent and clear. If they have, and you can swing it, let them hold your future travel money, in hopes of a great sale when travel returns.